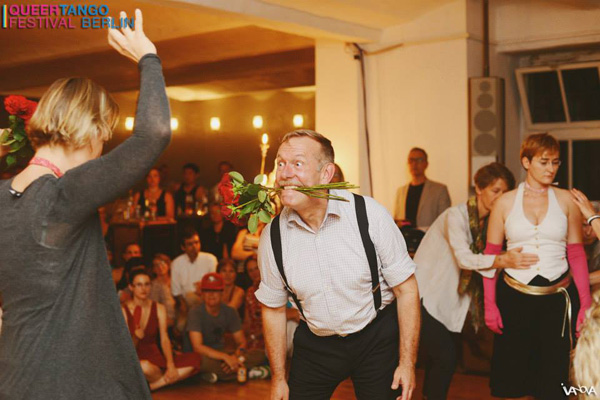 It cannot be anything other than an honour to be part of a performance piece to be produced at lightening speed by Brigitta Winkler, to whom so much that is significant in Queer Tango can be traced back, and Marc Vanzwoll, another prominent figure in the Queer Tango landscape, which, courtesy of Astrid Weiske, was to feature at the farewell milonga at this year’s Berlin International Queer Tango Festival. Obviously, I leapt at the chance. But what was it to be? Brigitta and Marc, who had spent a weekend in New York City working out what they wanted to present us with, sent out intriguing messages: what answer would each of us give to the question: ‘What is tango to you?’; what three questions would each of us ‘ask tango?’; alarmingly, costume requirements were initially flagged as ‘naked tango’ but with an explanation that made it plain that this ‘nakednesss’ was to be relative; and then finally – and also I thought, alarmingly – the text of a poem by Maya Anglou, ‘Phenomenal Woman’. Alarming? I read it. It is a wonderful poem about Angelou’s own delicious sense of enjoying her own, deeply physical sexuality, an original subject successfully and imaginatively negotiated though the most musical of languages. My alarm arose from its overt, indeed, celebratory heterosexuality. How could this be relevant in this context? It made me uneasy. I said as much to Marc who, shortly afterwards, asked if I would read it in the performance. Of course I would – and at a stroke I could see how by reading it as a man and gay man at that, the sexuality might be invoked at a level which broke across the boundaries dividing heterosexuality and homosexuality or anything else. As some of the women dancers were to dance tango to the musicality of the words, plainly it was to made wonderfully queer! Indeed, as I expected, unease routinely gave way to joyous engagement because each injunction, no matter how unlikely, was coming from people I trust and respect.

With only two rehearsals and a bit of a picnic in a cemetery, we had to work fast. Brigitta and Marc came thoroughly prepared giving us brief accounts of what we were to do in each short scene. I was struck by – and could see the wisdom of – never discussing with us what each set of actions might mean. Meaning I supposed was something for us to intuit or for our audience to create as they interpreted what they saw. A more leisurely timetable, said Brigitta after the performance, might have enabled the dancers to contribute more in developing the choreography, but time was at a premium. As it was, rehearsals though really enjoyable, were hard work. Everyone brought to the enterprise willingness and, inevitably, aspects of our different characters, which did indeed help shape and colour the undertaking. We were Queer Tango dancers from around the globe as might be expected at an international event of this kind. Sometimes roles were ascribed. As the only man of this impromptu ensemble (this was accident, not design), I rarely felt my minority status, although in the scene where – taking a cliché of tango and turning it on its head – I was to be force fed red roses (washed, and with the thorns snapped off, dear reader) my being a man was useful. In this short account, I am not mentioning names for fear of leaving any of my co-performers out, but my generous, thoughtful rose feeder and I developed a response to this unlikely brief which worked for us and we hoped worked for others.

And so it went on.

Of course, performance is something else! Much of it became more fully alive with an audience, which was great. Glitches, such as it being so dark I could not actually see the text of the wonderful poem and was reduced to reciting those passages I had learnt by heart, were doubtless inevitable, given our tight timeframe, but overall, it was a wonderful, memorable experience and it was warmly received on the night. Brigita and Marc were gracious in their thanks both then and afterwards. I noted the reactions of others and was heartened by messages saying how much some had enjoyed it, and only gently surprised by the Queer Tanguero, whom I greatly respect, taking issue with, as he saw it, the rose eating as evidence that there is still mileage in men being humiliated.

For myself, I welcomed the experience of working with others in this way and I am delighted that something innovative was added to the, now, conventional diet – however excellent – of Queer Tango performances by this impromptu, ensemble piece. In future, I very much hope (maybe with a bit more preparation time!) Brigitta and Marc will have the further opportunities to develop this approach with others, and in other contexts.

This tango performance class was, surely, only a beginning…