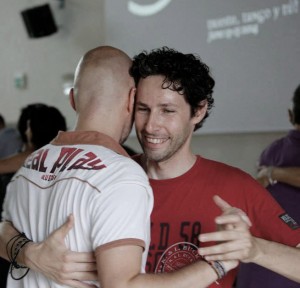 The year 2014, a year of “change”, I will never forget. I strongly feel like sharing a small part of my Tango Queer Story. To explain how it changed from what it was not to what it became now: an experience especially Italian and north eastern Veneto, where I mostly travel. It really fills me with amazement and wonder while I reorder my thoughts.

I have been dancing since 2008 and I never thought I would have found this reality: I did not know it was there and neither I was searching for it.

In 2010 in Buenos Aires I experienced it for the first time: an emotion I still feel on my skin as if I was still there. I knew there were milongas where you could also dance with people of the same sex, but I still did not get very well the dynamics of “role interchanging” [intercambio]. I must say it was also a surprise for me. Afterwards I admit I was a little “stoned” and little by little the melancholy began…

Getting to know a really alive “Roman” and European community, a big family who meets on certain fixed dates and share this passion, was enlightening.

In the beginning I asked a few friends to help me practicing the follower’s role. All of them accepted with a smile and a hug; others then wanted to try, others still today want to be just leaders, but more and more people ask me to try the “other” role before they were dancing just with me and now they try to dance between themselves.

While time passed, I was building in this way a little bit of ‘daily Tango Queer’ next to me, with discretion and delicacy, where I can experience regularly some tandas in every milonga, with some man dancing as a follower. I can not wait for Queer events to get loose, I have to keep in shape!

The atmosphere created around Queer Tango made the name in itself become limited. Somehow, it describes just tango danced between people of the same gender and mainly in the GLBTQ scene where it came from… should we add an other name to identify it? I think it´s necessary. It has found its own way and dimension, equal for all. Each and every person in tango has his/her own way of communicating and a different expression. To keep on being perceptive and adapt to this variety is an experience who enriches in both roles. When one understands the infinite room for connection and communication one doesn´t come back.

Two elements excited me most and I would like to underline them:
The first concerns the experience in exchanging roles that went beyond the teaching. Before it was just a game remaining linked to the class. Being able to live both roles created awareness for all for a better technique, but the best thing that I see is that the exchange of roles, became a part of each normal tango event.

I meet, see and dance always with more and more who are people interested in experimenting with the other role: a revolution of each other’s tango which deepens with new emotions. For me it is extraordinary to see men, who never thought about the idea of dancing with an other man, slowly getting curious and getting closer to that idea, and then get amused and try, even as leaders or followers with freedom, serenity and a smile.

The second aspect, live milongas, is that it has been given visibility, sensibility, value, tenderness, identity and personality in the ronda, also to Queer embraces, in particular between two men. I will try to explain myself better. In the beginning I felt that:

a couple of men were playing and dancing were taking away tandas from women
a female couple was an alternative to be seated (i.e. as a wallflower for the lack of men)
female leaders with male followers were… well… did it have any sense???

Now I have the sensation that all this was swept away by the clear image that in tango, passion and feelings are always the same, something apart from role or gender. The embrace, the intimate communication and emotion which live in each couple… It is always a tanda to remember.

I think it´s good to see queer couples dancing together – also for the culture and to the common sense in general. A view [or thing] which becomes an accepted habit, recognized and not related only to gender. It´s an achieved freedom.

I love to dance as a leader with women, my passion for tango has been created and it is kept alive by everything I live, give and take in this exchange. I often hear people telling me that with all this good and new discipline I created for and in Queer Tango, I am giving back a little of all the wealth I received through living tango as a leader in all these years, in many places, with great dancers. (And I would like to state that the few women who I danced as a follower with, they are just extraordinary).

Creating dedicated queer events, one wants to give to the participants the opportunity to experiment in complete freedom and without too many mental obstacles … It is not yet so easy and evident for all to let go in any milonga. For example, QueerVi is a pratica for beginners, also for the other role, a space where you can experiment with ease. La FRA! (instead) was the first official afternoon milonga!

I want to thank from my heart some people in Vicenza and the province who always supported me in the pursuit and creation of a queer atmosphere: it is not rhetoric – wihout you it wouldn’t be the same thing today! Thanks to teachers and friends Emiliano Fernandez and Jessica Lull, Guia Maza (Non solo Tango-club Ass. from Vicenza), Stefano Tosin Amadoril, Elisa Liviero, e Chiara Bernardi (Basstango, Ass, Hangar 383 from Bassano Del Grappa (VI) ).

Special thanks also to all those who have shared a tanda with me, men and women, leaders and followers making my tango experience unforgettable.

“Tango is complete in its two halfs”, “a passion that makes me have fun sharing a moment of peace leaving always a smile and a bit of tenderness. It is not only tango, neither the search of perfection somehow or just recharging: I feel it is also deep relaxation and being separated from all the rest,  – something which reminds me that there is always a bit of beauty, true and sincere, around and in side of me to see and to enjoy!”

This is all, at least for now… the rest is still to write, live and dance together!
I wish you all a wonderful year.