Indeed! It seems that the universal truth that “everything passes” applies even here to this famous and celebrated venue. I am grateful to Mercedes Liska for alerting me to this through a recent post.

After 13 years as a place of pilgrimage for queer tango dancers from around the world, Tango Queer[1] closed its doors with a party on 22nd May. Perhaps you knew?

It closed for a variety of reasons many of which, but not all, seem peculiar to Buenos Aires.

Mercedes has written a moving and thoughtful account with some atmospheric – and now, historical – photos by Kevin Karel Footer:

I am especially interested in asking those who may know more if the demand or need for the separate “safe space” is growing weaker? A need in principle is not always matched by dancing bodies week after week…

Google Translate is coarse creature, but its slightly crazy translations have a poetic charm, so I reproduce them here, with apologies Mercedes Liska, in the hope that, in the absence of anything more refined, most English speakers can wade through that craziness, towards something approaching the original meaning of her text:

The closing of the Milonga Queer
THE IDEAS ARE DANCING
By Mercedes Liska, Photo Kevin Carrel Footer

In the Milonga Queer, the law of equal marriage, marriages, new projects of friends were celebrated, dances patriotic ephemerides were danced, carnivals were disguised. Emblem of the changes occurred in the perception of gender and sexuality, after 13 years closed its doors. In this elegy, Mercedes Liska analyzes those clues, her hugs, the experimentation with the roles, her links with popular feminism. And it explains why “la Queer is a testimony of what came: the fabric of alliance between women”.

Days ago it was announced on the networks: “The current political and economic situation is not conducive to the Argentine milonguero world, and the Milonga Tango Queer is no exception. That’s why we decided to suspend activities for a while and to close these beautiful years shared with a party on Tuesday, May 22nd. ”

The milonga Tango Queer is almost 13 years old, in the neighborhood of San Telmo, in Buenos Ayres Club, the rock cradle of what used to be the Arlequines Theater. His days were Tuesdays. He had a pre-existence, a process of gestation more dispersed and transits that allowed him to find his form: The House of Encounter, Casa Brandon, Simon in his Labyrinth. Houses in every sense, of ample living, open but of intimate climate. Places where ideas are assembled, unexpected links are woven.

An unknown. Queer tango began to exist when practically the term was not used in Buenos Aires, much less what was meant. Tango what? From the beginning it fell badly, it sounded foreign. It was a loan: to take the word of a lunfardo Englishman -a speaker of the plebeian- who contained the ambitions to subvert the course of the rules that regulate the affections, love, friendship, sexuality, identity. The gender. Through these appropriations the senses of the term itself were also mutating.

In the same way, if the possibility of dancing tango among women today is quite naturalized, at the beginning of 2000 it was unthinkable. There were different initiatives that were little by little getting wedge in the world of 2 × 4, even, the first gay milonga of Buenos Aires was gestated by men and was called La Marshall.

They were still years of struggle for the visibility of urgent needs and problems of various kinds. It was an ant militancy that implied the effort, and the risks, of getting out of those livings of friendly socialization and sheltered from homophobia. This fight was also fought in the tango, jumping to the jugular of the cultural history of modern Argentina mounted on heteronormativity. Queer tango also came out of its living room and was located closer to the Buenos Aires circuit of milongas, it became more visible at the cost of holding the space with a lot of waist. His presence helped to spread the social perception of the genre.

This happened in years of rearrangement of the nightlife. The clearly separated and identifiable heterosexual and gay ghettos on which socialization was organized in the 90s were giving way, and needed the conversion of interaction codes and the abandonment of the presupposition of desires and expectations. For the intermediate generations it was not easy. Queer milonga, among other practices and spaces related to popular music, was a key territory of experimentation and testing of new trans identity languages, and it was above all through lesbian, bisexual and heterosexual women who permeated these convergences. The Queer is a testimony of what came: the fabric of alliances between women.

The closure of the milonga makes us aware that the plots of these social microhistories that were stitching together everyday life at the edges of major events can be lost. It has to be told. The obstacles of this context are evident and continue to advance like a tide that crosses everything. It is a final point that mobilizes. And now?

Now is another time. From the collective struggle of women for rights and delayed demands emerged a cultural movement, eager for creativity, new ways of communicating, of substantiating militancy. The music is there, accompanying, haranguing, integrating. It became much more evident that ideas also dance, that bodies want and need to participate, say things. Which are the most accurate materialities of the vital existence, the places that guide us towards the path of enjoyment, or on the contrary, that indicate if we are in another way.

In the year 2010, equal marriage was approved and the milonga was celebrated all year round. The efforts had been worthwhile and had to be celebrated to your liking. It was a time of epics that left indelible marks in the memory of many. In the milonga, weddings, birthdays, farewells and new projects of friends were shared, the patriotic ephemerides were danced, the carnivals of each year were disguised. How to forget it.

“Tango awaits you”, murmurs a phrase invented in corners and corridors of Buenos Aires nights. To the, those who inhabit La Queer nostalgia invades us. Let it be the opportunity of a new beginning. 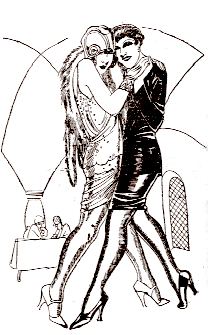