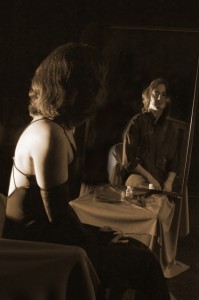 SOVVERTANGO is a new project by Eyes Wild Drag and Linguaggi del Corpo-Altrogenere and the support of Balloromo & the Queer Tangueras and Milonga Popolare 100celle.

A new experiment in subversion! Rules, languages, identities, roles and relationships… Tango, a traditional emblem of rigid gender roles, becomes a game of reinventing relationships using the dynamics of the encounter with the Gender Drag.
The cooperation of Linguaggi del Corpo and Eyes Wild Drag during GendErotica Festival 2013 was the beginning of a a new path of experimentation and study that is now taking its first steps at the Libera Milonga of Teatro Valle Occupato. Eyes Wild Drag’s ‘Style Station’ let’s you have fun queering the traditional relationship of a tango couple.

Photo above by Claudia Papini