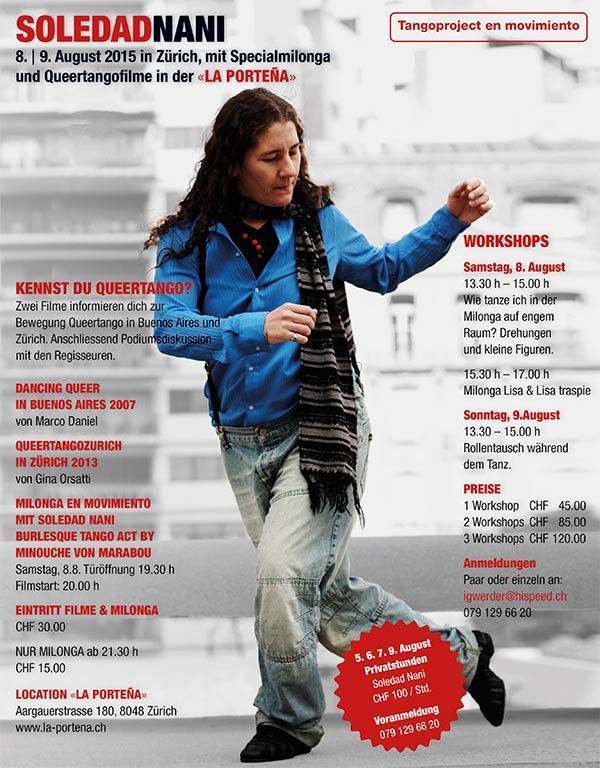 Do you know Queer Tango?
Two films about the Queer Tango movement in Buenos Aires and in Zurich, followed by a panel debate with the directors:

Soledad Nani – tango dancer and teacher
Soledad Nani – tango dancer and teacher studied both roles in tango at the Buenos Aires Centro Educativo del Tango. She has assisted well known teachers such as Rodolfo Dinzel, Olga Besio and Juan Miguel Exposito. Soledad involved herself in a range of social projects as tango teacher: she teaches regularly at Tango Queer in Buenos Aires and at the legendary tango café, Los Laureles in La Boca. At international Queer Tango festivals, Soledad is valued for her exciting workshops and her beautifully poetic performances. She has previously visited Tangoproject en movimiento with great success and is now here for the third time.

Marco Daniel, who has lived for several years in South America and in Argentina, when he created first documentary film about the most sensual dance of all dances: tango.

Gina Orsatti started out as a graphic designer and art director, and for 15 years she gained a variety of experiences working for advertising agencies. In 2011-13 she studied Digital film and Animation at the SAE department of Creative Media Education. As part of her thesis, she realized the film about the Queer Tango scene in Zürich. This is film marks her entry into filmmaking. Gina Orsatti is interested in people, their stories, what motivates them, wether they are presented in text, audio, video or as images.